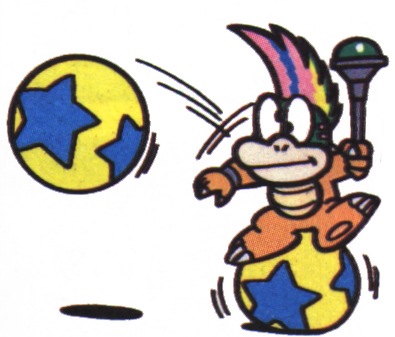 STRENGTHS: Can split into four, can balance on a ball.

BACKGROUND: Even though he's second oldest, Lemmy is the runt of the Koopalings. If it wasn't for Bowser, he'd be travelling with a circus, performing his tricks for various passerby.
He knows how to clone himself, but this is probably his only advantage. On the ground, Lemmy is rather clumsy but is a naturalist on his ball. It's rumoured that he learned to balance on his ball before he even began walking!
In Super Mario Bros. 3 Lemmy is the sixth boss and in Super Mario World he's the third boss.