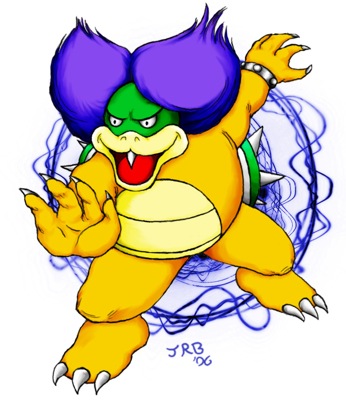 STRENGTHS: Whirling Fortress is difficult to avoid, doesn't take much damage from any attack.

BACKGROUND: Ludwig Von Koopa is a very, very smart Koopaling, and he's also the oldest. Ludwig enjoys designing some really tough machines, but rarely seems to build any. His hair is completely blue and he wears a green shell. Despite Ludwig being very smart, his nickname is Kooky. Where these names came from I will never know - maybe it's due to his crazy looking hair. Ludwig is also a bit of a gentleman, he enjoys listening to a bit of opera in his spare time, as geniuses (albeit sometimes evil ones) often do! Although his full name is Ludwig von Koopa, most people just call him Ludwig. In Super Mario Bros. 3 Ludwig is the seventh boss and in Super Mario World, Ludwig is the fourth boss.