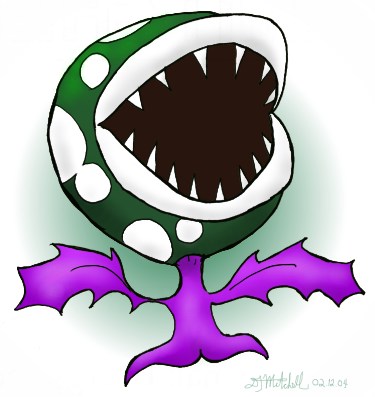 STRENGTHS: Strong against many magic attacks including Sleep, Jump, Poison and Fear.

BACKGROUND: Chewy is a distant relative of the Piranha Plant species, usually found in deserts and arid mountain regions. They have green flowers (or "heads") with purple leaves, and most of them are capable of walking short distances.
These creatures are not as tame as Piranha Plants and as such they are not found as often in the Mushroom Kingdom: even the Koopa Troop doesn't use them. They may have been herded into battle by Smithy's troops during his invasion on the Mushroom World. Apparently Shy Aways are able to get along with this creature quite well, and Chewies have been seen defending the flying plant-lovers.