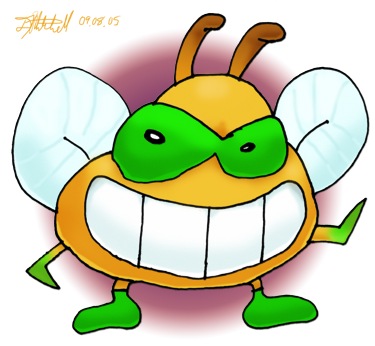 BACKGROUND: These buggy little creatures have been around since Mario's earliest days of clog clobbering. It is granted that this species is extremely adaptable for it has been found wild in a variety of places, including the Mushroom, Beanbean, and Birabuto Kingdoms.

EVOLUTION: In Mario Bros. the Fighter Flies were gruesome little things with large bug eyes and a wide grin. They had red faces with purplish bodies and wings and had long yellow legs with pink feet, arms, and antennae. In Super Mario Land, their names were shortened to just "Flies" but retained the same ghoulish grin. This time around their eyes became much more cartoony, their bodies became dark green and striped, their faces a tannish color, their limbs and antennae black/navy blue, and their wings sky blue.
Their latest incarnation was found in Stardust Fields in Mario & Luigi: Superstar Saga. This version retained the white wings along with the chubby features; in fact, its face was so large that it obscured it's entire body. Its wide grin was also there and it also had stubby blue arms and legs with pink antennae. This time, its eyes actually became a set of green goggles, with two squinty eyes underneath.