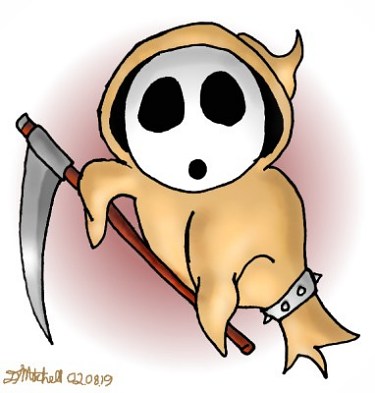 BACKGROUND: Greapers are said to be the ghostly remains of the sailors that once inhabited the ship which Jonathan Jones and King Kalamari control at the bottom of the sea. Now these spirits haunt the halls of the ship and try to spook invaders.
Interestingly, while these ghosts were probably King Kalamari's victims many years ago, it seems that they don't bother him or Jonathan Jones. The ghosts aren't under Jones' control, either, but it seems they have come to live in harmony with their fishy neighbours.
Greapers can be recognized by the orange robes they wear and the sickles they carry. They often team up with Reachers, living skeletons of the ship's crew that still hold on to their treasure after all these years. They look like they may have been Shy Guys once, but that's unconfirmed.