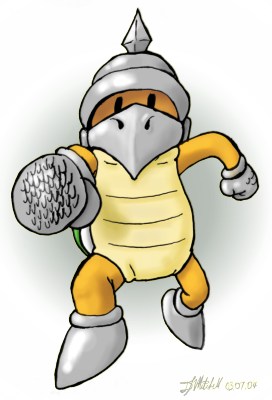 BACKGROUND: Jagger was once a soldier in the Koopa Troop but when Smithy invaded the Mushroom World and took over Bowser's Castle, Jagger ran away. He made his way to Monstro Town where he met Jinx. The martial arts master agreed to make Jagger his student and Jagger vowed to train hard in Jinx's Dojo until the day he would return to the Koopa Troop and make Bowser proud.
Jagger wears light armour including a helmet and metal boots and gloves. He's a good fighter but because of Jinx's teachings he does not attack unless he needs to - or unless Bowser orders him to.