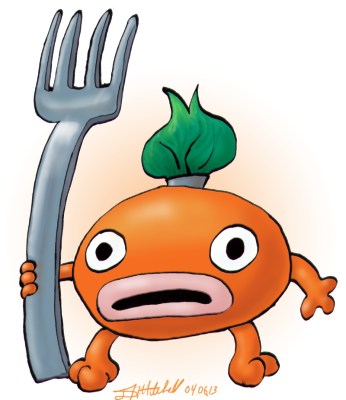 BACKGROUND: These odd little creatures carry giant dinner forks to defend themselves. Like some of Valentina's other troops, they tend to be a bit lazy and they are often found sleeping! They have bulbous orange bodies and a tuft of green hair.
Jawfuls aren't particularly aggressive or dangerous, they should be easy to avoid. However, they take orders well, which is why they can be found with a variety of other enemies, and they can be pretty dangerous when they wake up and start attacking.
The most bizarre thing about Jawfuls is that they have a second body inside their mouths! The second body is often equipped with a fork as well. It's unknown if the two bodies have separate brains and nervous systems.