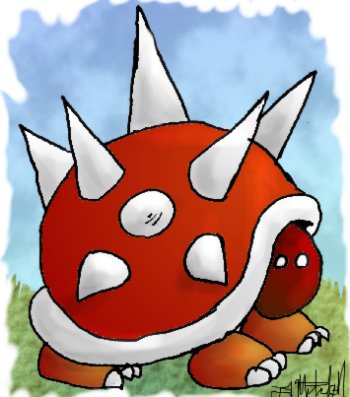 STRENGTHS: They can't be stomped (or they're strong against it, at least), and they usually appear in large groups.

BACKGROUND: Spinies are strange little spike-covered turtles kept as pets by Lakitus. This connects them to the Koopa Troop by association, but they don't necessarily have any strong loyalty to Bowser, especially considering the recent revolts held by some Lakitus (more details on that when Lakitu is added to the compendium).
Spinies are usually only found with Lakitus, but ocassionally you'll find them on their own. In Super Mario RPG Spinies were replaced by Spikesters and Spikeys. It took me a long time, but I decided to include Spikey and Spiny as the same species. (Spikester is a stronger, but similar species.) Admittedly, Spikesters have several different characteristics from Spinies, but they share the same spikey shell, dark face hidden inside, and similar colouring, not to mention that both start as "eggs". If new evidence appears in the future, I may split the two groups up.

EVOLUTION: From SMB through to SMW, Spinies didn't change much at all. They did go from having brown faces to black ones, but otherwise, remained the same in appearance.
Then, in Super Mario RPG, a drastic change took place. Suddenly, Spinies were replaced with similar, yet notably different things called Spikeys. Spikeys stood on their hind legs and had arm-like forelegs, as well as a somewhat different shell structure from Spinies. However, the two shared very similar traits, including colouring, spikes, and the fact that Lakitu keeps them both as pets, so many scientists have chalked the change up to an unusual, short-term, generation-based mutation. Such transformations have been seen in species like Little Goombas. Thus the two are considered one in the same.
In Super Mario 64, Spinies returned to their old selves....albeit in a much slower version. Though they are now impervious to all attacks, their slowness makes them virtually harmless in battle.