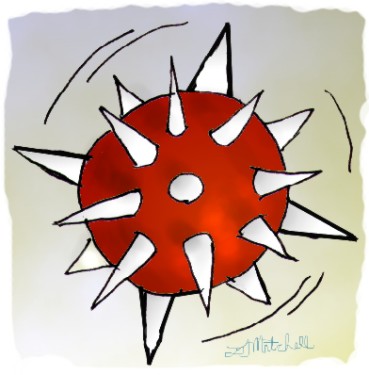 STRENGTHS: They are thrown at Mario fairly quickly, and in large numbers.

WEAKNESSES: None, except that they have little or no control over their flight paths.

BACKGROUND: These eggs "hatch" (it's really more like unrolling) into Spinies, Spikesters, and Spikeys (catalogued together with Spinies in this compendium). They are kept in endless supply by Lakitu, who likes them as pets - and weapons!
When a Lakitu is around, it is often apt to dump lots of these eggs on Mario's head. When they hit the ground, they usually "hatch".

EVOLUTION: They haven't really changed much over the years, but what they transform into has. Originally, all eggs became Spinies upon hitting the ground. Then, in SMB3, some "unripe" eggs began to emerge. These ones would remain in egg form after hitting the ground, and they would roll after Mario, making them quite troublesome.
This feature disappeared in Super Mario World. Then in SMRPG green eggs made a return. Only now they hatched into "Spikesters", a more powerful version of Spiny (which was known as Spikey in that game). Although I count Spikesters and Spinies as different species, I've included both types of eggs here as they are very similar.