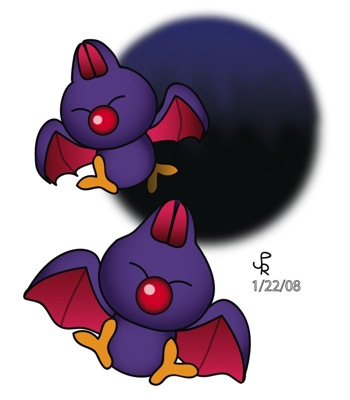 SKILLS AND ATTACKS: Flying and swooping.

BACKGROUND: Swoopers have been an incessant nuisance for Mario in all of the caves that he has visited for quite sometime. Swoopers attack by doing just as their name says; by hiding up on a ceiling and swooping down on Mario and friends when they come along.

EVOLUTION: In Super Mario World, Swoopers started out green with red wings. They had large noses and thin feet. In Super Mario 64, being named Swoops, they lost both of these features in place of a more cartoony face with big buckteeth on a much larger head. They also became purple, a color which has stuck with them since. Like most other enemies, Swoopers in Paper Mario recieved a papery redesign. They now looked identical to their Super Mario World counterparts except for retaining their purple color and ditching the beady eyes for a more squinty kind.
In the sequel, Paper Mario: The Thousand Year Door, Swoopers started having big spots around their eyes and had a much larger wingspan, a pattern only to be seen in this game, returning back to normal in Super Paper Mario. Their latest incarnation in Super Mario Galaxy shows them much more like they did in Super Mario 64 for they are missing feet, but in this game they have large, yellow, glowing eyes.