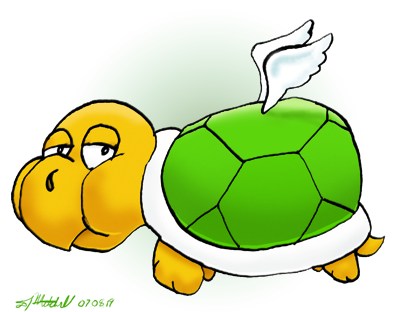 BACKGROUND: Tub-o-Troopas are oversized green Koopa Paratroopas. Some were trapped in Bowser's Keep after Exor and the rest of the Smithy Gang invaded it and Exor used hypnosis to bring them under his own power.
In spite of their tremendous size, Tub-o-Troopas are actually pretty weak. They don't cause a lot of harm and they're often slow to attack. They can be dangerous in confined areas, though.
Tub-o-Troopas are also one of the few troops that didn't really seem to snap out of their hypnotized state after Bowser and his teammates came to reclaim Bowser's Keep from Smithy. Or else they just aren't afraid of Bowser.

EVOLUTION: Colossal Koopa Paratroopas first appeared in Giant Land. Their wings were exactly the same as an ordinary Paratroopa, but they had enormous oversized bodies. They also had odd, blocky features.
They only appeared once more in Super Mario RPG where Smithy employed them. These ones seem even fatter than before and have the same undersized wings.