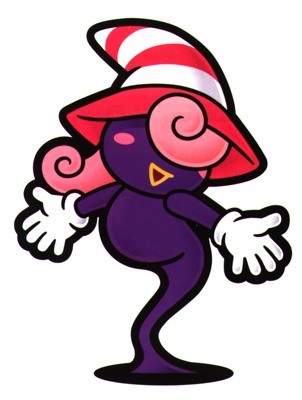 STRENGTHS: Can move quickly when in the shadows.

WEAKNESSES: Not particularly strong or annoying like her sisters.

BACKGROUND: The three Shadow Sirens have been sent by the X-Nauts to dispose of Mario and take the magical map. The youngest of the Sirens, Vivian controls the element of fire. Vivian is usually picked on by her older, forgetful sister, Beldam. Because of her mistreatment, she usually returns any kind favors anyone does for her. This character was very important to Mario in the later chapters, after she switched to his side. She seemed to develop a crush on Mario and even came close to telling him that she loves him after their adventure ended.