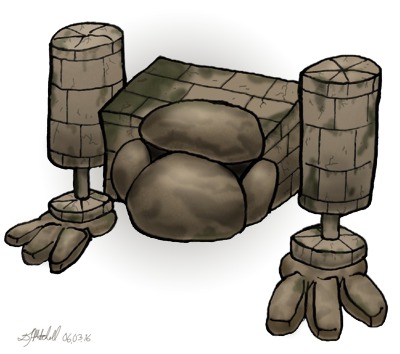 BACKGROUND: These strange, animated rock creatures are as old as Barrel Volcano itself. Whether brought to life by some ancient magic spell or formed from some truly strange evolution (hey, it's the Mushroom World, stranger monsters have happened), Corkpedites are a force to be reckoned with. They never harm other monsters in the volcano, and nobody is sure what they eat, or if they have to eat at all.
The creatures have a "head" that is separate from their body, and if their bodies are destroyed, their heads will perform an explosive suicide attack called Migraine that will all but kill any attacker. Inexperienced adventurers should keep their distance. Then again, what are inexperienced adventurers doing in an active volcano?