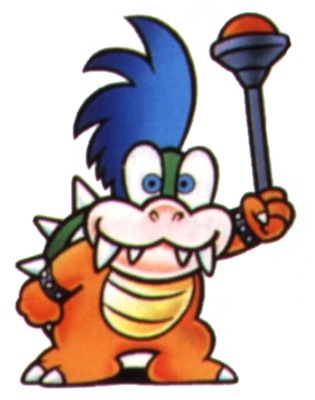 STRENGTHS: Can reflect fireballs in M&L:SS.

BACKGROUND: Larry is the youngest Koopaling, and is also one of the weakest. Despite having high HP for a Koopaling, he has startlingly low offence and Defence. Larry is the shy, quiet Koopa, and actually prefers his hobby of gardening to fighting. Although Bowser doesn't approve overall, it allows his son to be creative with his plants, and breed new Mario-beating monsters, which Bowser highly approves of! He only knows two attacks, in addition to his wand, which makes him one of THE weakest Koopas around! Larry Koopa also likes tennis. Larry Koopa was the first boss in Super Mario Bros. 3 and was promoted to seventh and last in Super Mario World.