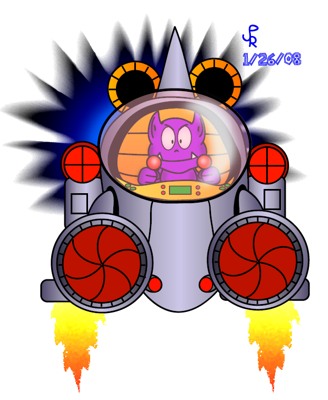 STRENGTHS: His spaceship/war robot, Pagosu, is armed with powerful weapons. It is also

BACKGROUND: Tatanga is a space alien bent on taking over the world. (What Super Villain isn't these days?) One day, he decided to marry into royalty. So he drove his ship over to Sarasaland and captured Princess Daisy. After Mario took him down in an air battle, Tatanga flew off. When he met Wario, Wario let him guard the Space Coin. Convinced Mario couldn't possibly get to the Space Zone, Tatanga set up camp there. After Mario became the world's first plumber in space, Tatanga was beaten once more, and was never seen again.

EVOLUTION: When Tatanga first appeared in Super Mario Land, he was equipped with Pogasu, a large and powerful UFO that fired scattering rockets. Tatanga himself was quite hard to make out in the large ship.
In Super Mario Land 2, Tatanga was reduced to fighting Mario in Pogasu's escape pod. While it was even faster than the complete ship, it didn't have the same defensive capabilities. Tatanga is a lot easier to make out in his second ship, and his face is much more detailed.