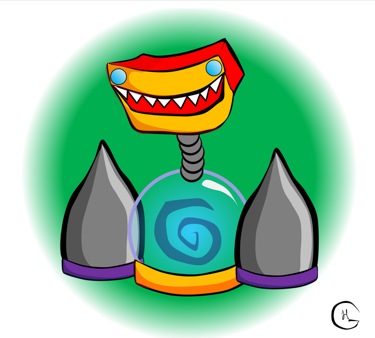 STRENGTHS: If destroyed, a backup Headgear can be summoned.

WEAKNESSES: Wouldn't it be pretty painful to be suspended in the air by your head?

BACKGROUND: Fawful's main gadget. Though not exactly a monster, the Headgear is a technological marvel that seems to have a mind of its own. It's a fishbowl-shaped, electric blue globe with a rocket booster on either side and a bizarre red-and-yellow nozzle coming out the top. Initially, it looks like a battery or rolling pin, but when activated, it morphs into a grinning pair of jaws! And yes, they're every bit as crazed and malicious as their inventor.
Fawful uses this widget to inhale and store anything he needs, such as Princess Peach's voice and later Cackletta's life energy. It also doubles as a high-power plasma cannon that fires in rapid pulses.
Though how the Headgear actually works has never been understood, it it is believed that it gets its energy from a plasma core in the center of the fishbowl-like structure, which would explain the florescent blue glow. This could also explain why Fawful was unable to use the plasma cannon while he was housing Cackletta's spirit: he would probably have to turn off the plasma so not to vaporize his nearly-dead master.
After his defeat at the end of Mario & Luigi: Superstar Saga, Fawful lost his helmet(and he'd already used up his spare). Powerless and vulnerable, he fled to the Mushroom Kingdom, hiding in the sewers beneath Peach's castle. He had no Headgear in Mario & Luigi: Partners in Time, presumably because he was trying to rebuild it.