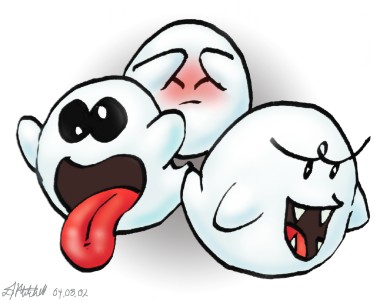 BACKGROUND: Boos or Boo Buddies come in a lot of shapes and sizes, but they all look like puffy white ghosts and they're all tricky. Most of the time Boo Buddies appear in groups, but single ones can be found in many places too.
Boos love to play tricks on people and scare them, but when faced by someone with a lot of courage, they hide or shrink away. They like to haunt old buildings and a single castle or mansion can be haunted by dozens or hundreds of Boos!
Boos ocassionally work for Bowser because they are always up for some trouble, but most of them are more closely associated with King Boo.
There are also relatively peaceful Boos like Bow and her mansion of friends.

EVOLUTION: Boos first appeared in Super Mario Bros. 3 as white, puffy ghosts with big faces and their appearance hasn't changed a lot over the years even though they went n to star in more games than almost any other monster.
In Super Mario World they had some new facial expressions but otherwise looked the same - they were also named Boo Buddies this time. The ones in Super Mario Land 2 look about the same but are a bit smaller.
In Yoshi's Island they shrank quite a bit, and they have baby-like smiles on their faces. The Super Mario RPG version has a blue mouth and is called L'il Boo...it might actually be a separate species.
In Super Mario 64 Boo Buddies grew again, becoming almost as big as Mario - only to shrink back to their previously tiny size in Yoshi's Story, then back to a size that was somewhere inbetween in Paper Mario. The Paper Mario Boos are probably my favourite, and this may be the first game where they were just called "Boos".
In Luigi's Mansion Boos became a bit more ghost-like and transparent but were otherwise the same as before. Super Mario Sunshine is actually the first game to really change the Boo design much - in this game their tongues hang way out and they have big blue eyes. They're pretty dopey looking!