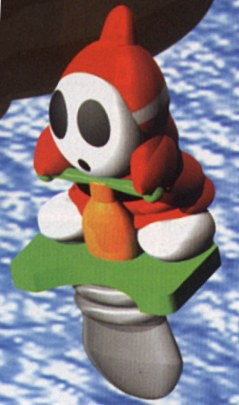 STRENGTHS: They can bounce!

BACKGROUND: Shysters are Shyguys who love bouncing! They are never seperated from their pogo-sticks, which is how you can recognize them. In SMRPG, Smithy designed sword-tipped pogo-sticks for them. The better to terrorize helpless Mushroom people with.
As mentioned above, their affilitations are numerous. They have worked for both Bowser and Smithy, and are members of the 8-bits club. This is because the 8-bits club, which first appeared in Super Mario Brothers 2, has become a group for freelancing villains, which sells it's services to the highest (or most scariest) bidder.

EVOLUTION: Shysters haven't really changed much. They first appeared in Super Mario RPG, where Smithy equipped them with sword-tipped pogo-sticks. Their second appearance was in Yoshi's Story (which actually takes place earlier than Super Mario RPG, chronologically). In this one they used regular pogo-sticks, and came in a variety of colours.