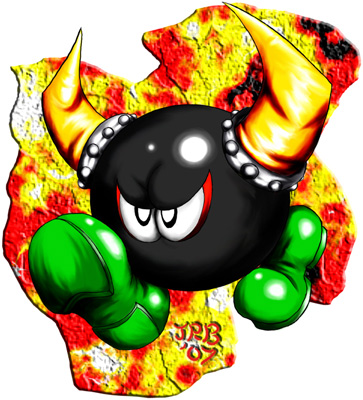 BACKGROUND: Deep in a sea of lava, the Big Bully waits for a challenger strong enough to get past his bully bodyguards and claim his star for their own. He may not be a real estate expert, but he and his twin are perfect for Bowser to entrust his stars to. But, as always, Bowser factored Mario out of the equasion and soon the powerful plumber knocked both Big Bullies into the lava, gaining two more stars and leaving Bowser to pound his head.
But one remained, bigger than the others and could not be defeated... at least not without a kart.

EVOLUTION: In SM64 and SM64DS, he was a big black ball with green feet and pointy horns that was as tall as two Marios. In MKDS, he was twice that size with no other difference.