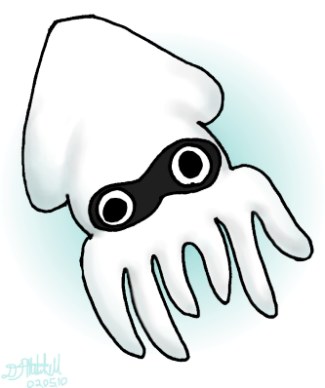 BACKGROUND: Bloopers are one of the oldest monster species in the Mushroom Kingdom. While they are typically wild and independent, these creatures are known to assist the Koopa Troop, probably due to the powerful black magic that Bowser and his underlings control.
Bloopers are intelligent and dangerous predators that will follow their enemies until they have fled or been beaten. These squid are typically white but may be pale pink in colour and some rare species have developed the ability to live outside of the water for a short period of time.
Female Bloopers are very devoted parents and they remain with their children until the young ones are old enough to defend themselves. When her territory is invaded, a Blooper mother will direct her children to scatter in all directions and sting anything they come in contact with. Needless to say, Bloopers are dangerous, and should be avoided whenever possible.

EVOLUTION: Bloopers haven't changed much since they first haunted Mario in Super Mario Bros. In that game, the squid was one of Mario's largest and quickest enemies. In the Lost Levels, Bloopers remained similar in appearance, but some could fly!
For some unknown reason, Bloopers shrank to about half their normal size around the time Bowser's children stole the wands from the seven Kings (Super Mario Bros. 3). While not as large, these ones were just as quick and dangerous, although they came in smaller numbers.
In Super Mario RPG the creatures returned to their normal size, and began attacking with their ink pouches more frequently. The ones living near Jonathan Jones' ship tend to be cowardly, possibly because Jonathan Jones keeps them in line.
Bloopers were later spotted in the tunnels underneath the Mushroom Village in Paper Mario. These Bloopers were much larger than previous ones.
Super Mario Sunshine sees Bloopers returning to their usual size, but they've changed a bit: these ones have large mouths which they use to spit globs of goo at Mario, and they can survive outside of the water! Perhaps this is a new subspecies of Blooper?
Bloopers appeared in Mario & Luigi (not picured) and a giant Blooper appeared in Paper Mario: TTYD, hiding in Rogueport. This Blooper has a unique mix of 2D and 3D design.