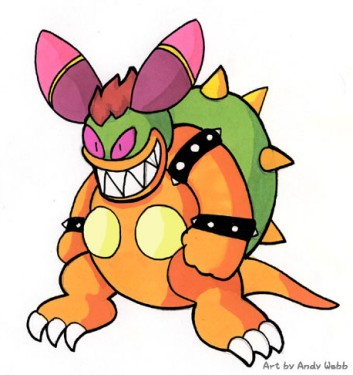 WEAKNESSES: Not knowing how to use Bowser's attacks very well.

BACKGROUND: When Mario and Luigi beat Cackletta they moved on to go downstairs to save the Beanstar only to find Popple and Rookie. Popple was the greatest greediest greenest shadow thief in the Beanbean Kingdom and he found Bowser on Hoo Hoo Mountain. Bowser had lost his memory so Popple renamed Bowser Rookie and put a blue mask on him to cover his eyes and made him do all the dirty work.
After losing the fight, Fawful stored Cackletta's spirit in his helmet and Cackletta told him to use the Peach robots which only made the Beanstar angry forcing Mario, Luigi, Popple, and Rookie to go flying in the sky on the Beanstar, and sent all of them to different places. Just as Bowser remembered who he was, he fell to Stardust Fields and was knocked out.
Later that day, Fawful and Cackletta came and Fawful asked if Bowser's body would be a good one to keep her spirit in and she said it would be good for now. But then she realized she was in Bowser's body so she told Fawful that she would stay in that body thus creating BOWLETTA.