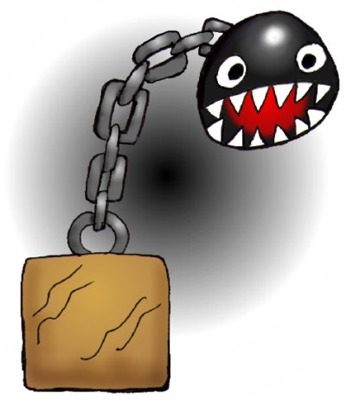 STRENGTHS: They are very difficult to hurt.

WEAKNESSES: Most are chained up, and can't move very far, they are also weak against Thunder

BACKGROUND: After an initial appearance during Mario's battle to recapture the seven wands from Bowser's Koopalings, Chain Chomps became a favourite sentry of the Koopa Troop, and villains everywhere.
Technically known as just plain "Chomps", but often called Chain Chomps because they are normally tied to a block or post by a chain, these creatures are black, spherical and have sharp teeth. They act similarly to dogs, and even bark! The full "Chain Chomp" name is used partially because there are some other varieties of Chomp (Fire Chomps, for instance) and thus, using the name "Chomp" alone can cause some confusion.
Chomps are generally wild, and as such must be tied up in order to make good guards; otherwise they would run away. If you spot a Chain Chomp, it is wise to keep your distance, to be on the safe side. Their bite is worse than their bark, as people who have gotten too close can attest.

EVOLUTION: Chain Chomp made his debut in Super Mario Bros.3, and quickly became one of the most-used enemies in the Mario series. The basic design hasn't changed much. In SMB3, he was basically a black orb-thing with sharp teeth attached to a block. Super Mario World 2 continued this tradition, but also introduced the idea of "roaming" Chomps - Chomps that were free to wander around, and attack Mario at will.
In Super Mario RPG, the appearance of Chomps changed slightly, probably because the game was designed by Square instead of Nintendo. They actually look a bit more like old illustrations of Chomps in this game, with the lighter colouring and less er..."googly" eyes.
Fans of Mario may know that Chain Chomp is actually based on a tied-up dog that attacked Shigeru Miyamoto when he was a child. Super Mario 64 made the Chomp's heritage a bit better known, by having it bark whenever Mario was nearby. Boy, those razor-sharp teeth look mean!
Finally, in Yoshi's Story, Chain Chomps are actually strictly Chomps. None are tied up, and I think it looks likely that this may cause a trend towards calling Chain Chomps by the short name Chomps in the future. Either way, the Chomps in this game have a pretty traditional look, but the rendered graphics make them look more spherical and solid.