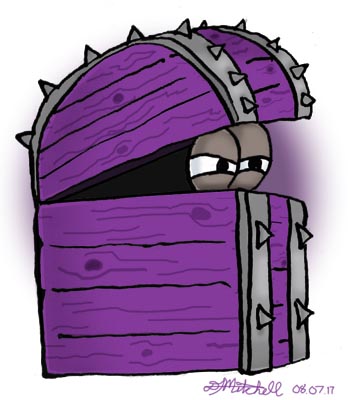 STRENGTHS: Strong against everything but Jump attacks and Geno's attacks.

BACKGROUND: Chester is one of the various chest traps found around the Mushroom World. One was encountered by Mario in Bowser's Keep. They look like simple brown treasure chests and they keep a Bahamutt inside to help them in battle.
Although they're not normally affiliated with anyone, it seems like Smithy struck a deal with the one that was kept in Bowser's Keep to try and trip Mario up! Chesters don't seem to keep gold coins, but they may have other treasures. All told, Chesters are pretty dangerous, so watch out before you open that treasure chest!