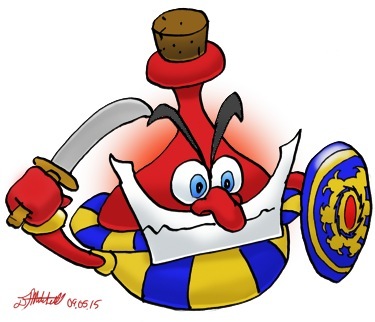 BACKGROUND: Cloaker is the brawn of the Domino and Cloaker pair. He resembles a red bottle with a big white beard (or is that a toothy smile?) He dresses in a somewhat traditional Arabic style. Cloaker wields a large sword and also has throwing knives in his arsenal. Together with Domino and his pet snake, Earth Link, Cloaker is fairly dangerous - though he's not so tough on his own. These two seems to be one of Smithy's last line of defence. It's unknown if they were created by Smithy or just hired by him.