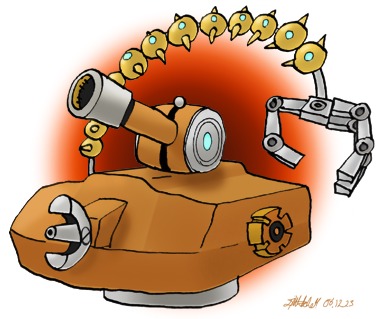 BACKGROUND: Combo Cannon is a defense mechanism constructed by Meta Knight and the Meta-Knights to fry Kirby's bacon. In other words, the cannon was built to kill Kirby. It also downed Dyna Blade!!! It is a very powerful laser. Somehow, it gained a mind of its own and began shooting at anyone on the bridge of the airship. The claw also went haywire and attacked. So run away, Mario and co.! Run as fast as you can!