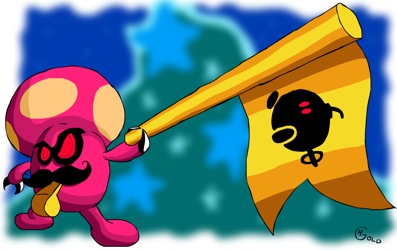 STRENGTHS: With his Shroob-Ombs and Support Shroobs in the way, he doesn't have to battle.

BACKGROUND: The Commander Shroob was the military leader of the Shroobs during their attack on the Mushroom Kingdom. He is supplied with several Support Shroobs to help him as well as several Shroob-Ombs.
Commander Shroob is typically quite lazy, as he usually makes his Support Shroobs and Shroob-Ombs do the fighting for him. When Mario, Luigi, and the Babies encountered him and his troops on Star Hill, he let his forces take care of them. The heroes had to use his Shroob-ombs to force him into battle. The four heroes eventually defeated the Commander Shroob and progressed further into Star Hill. Nowadays, the Commander Shroob quit the Shroob forces and has a job with training the Mushroom Kingdom's soldiers, where he has been forced to stop being so lazy.