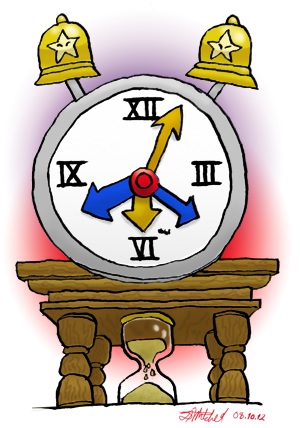 STRENGTHS: Strong against Fear, Poison, Sleep and Silence. Sleep may work on the Ding-A-Lings, though.

BACKGROUND: Count Down was a giant alarm clock held in Smithy's Factory, and may have been the central timing mechanism to coordinate production throughout the factory, although destroying it had no effect on the factory itself. It may have just been one more security system put in place by Smithy.
Count Down had two bells called Ding-a-Lings located on top which had their own artificial intelligence separate from Count Down.
Count Down could use different attacks as the time on its face moved forward, and the Ding-a-Lings could force Count Down's face to switch to a new random time to make it harder for intruders to predict what attack would come next.