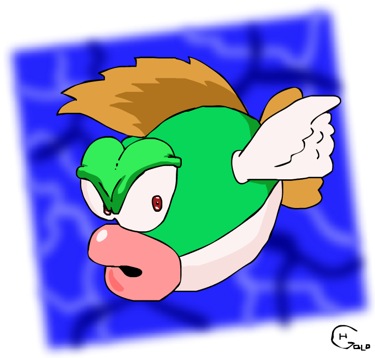 SKILLS AND ATTACKS: If you attempt to swim over or under it, it will swim towards you.

WEAKNESSES: It can't turn around and is vulnerable to fire.

BACKGROUND: Deep-Cheeps used to appear to be a colour sceme for certain Cheep-Cheeps, but when it appeared in World 6 of New Super Mario Bros, It developed a new tactic: To swim towards the player if the player decides to swim over or under it. Just like Cheep-Cheeps, they also had mega versions known as Mega Deep-Cheeps. Lately Deep-Cheeps have become more common.