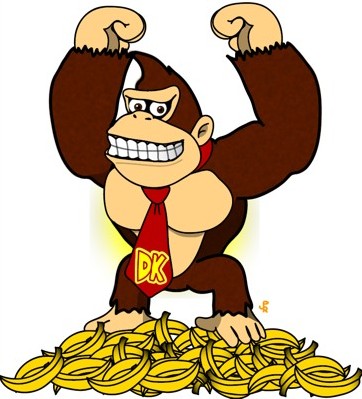 SKILLS AND ATTACKS: Many.

STRENGTHS: He's bigger, faster, and stronger too. He's the first member of the DK crew. (couldn't resist that)

BACKGROUND: Taking into account Cranky Kong's history, Donkey Kong was originally Donkey Kong Jr. He first appeared to rescue his father from Mario, who had locked him away for kidnapping Pauline, an act Donkey Kong would eventually commit himself.
Despite this, DK is very kind-hearted, and is always ready to defend his friends from his own arch-nemesis: the Kremling King K.Rool. He even has a girlfriend!

EVOLUTION: He hasn't chaged much over the years aside from the timeskip between his childhood and adulthood.