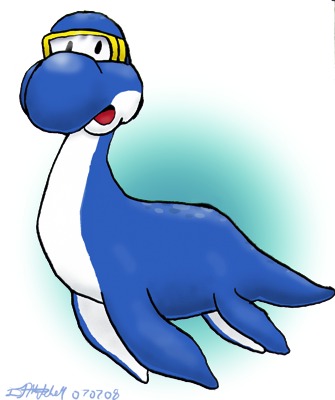 BACKGROUND: Mario is stuck in the swamp. He needs to beat the level. Dorrie is ready to give Mario a Ferry-Ride! When Mario jumps on Dorrie's back, he'll be able to get to the pipe on the other side of the swamp. But he still has to watch out for the trouble-makers...

EVOLUTION: Dorrie first appeared in Super Mario 64 where it looked like an ordinary Plesiosaur. Not that Plesiosaurs are an ordinary sight, but in the Mushroom Kingdom, many things are possible.
Dorrie had some cameos in the Mario Party series where it was seen that there are actually multiple Dorries, just like there are multiple Yoshis.
Dorrie's next adventure appearance was in Super Mario 64 DS. For some reason Dorrie started wearing a diving mask at this time, and continues to do so in New Super Mario Bros.