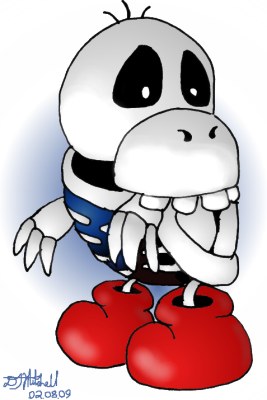 SKILLS AND ATTACKS: Come back to life.

STRENGTHS: Unless they are completely destroyed, Dry Bones will rebuild themselves every time they are beaten.

WEAKNESSES: Depending on the game, magic and fire will either work really well or it will be useless.

BACKGROUND: Dry Bones are the reanimated remains of dead Koopas. These skeletal monsters can often be found lurking in Koopa fortresses. They look a lot like Koopas in skeleton form, and often wear red shoes.
Nobody is sure how Dry Bones are made, or who makes them. Some believe they are purposely brought back to life by Koopa black magic, others believe they come back to life by some other force. In either case, they are usually, but not always, loyal to the Koopa King, Bowser.
Since they are already dead, it is very difficult to destroy Dry Bones. This is their greatest strength, and in large number they can be dangerous. Alone, however, they shouldn't pose too much trouble. If you run into one, smash it and run away while it pulls itself back together!

EVOLUTION: The evolution of Dry Bones follows the evolution of normal Koopa Troopas somewhat.
These undead monsters first appeared in Super Mario Bros. 3, where they walked on all fours just like the Koopa Troopas of the time. Basically they were just white versions of Koopas with hollow eyes (and the ability to withstand most attacks, of course).
In Super Mario World, both Koopas and Dry Bones underwent a radical change, walking upright instead of on all fours. For some reason, they also started wearing shoes, although why a skeleton would need shoes is anybody's guess!
They continued walking upright in Super Mario RPG, but for some reason Dry Bones don't wear shoes in this game. Maybe it's because most of them live in Jonathan Jones' sunken ship, where shoes would be useless?
After a break from being beaten by Mario, Dry Bones returned in Paper Mario. These especially cartoony versions of Dry Bones are probably my favourite, although their "hands" and head don't seem to be attached by anything. In addition to the red shoes worn by their Super Mario World predecessors, these ones have gloves. They also have hair on their heads, which is quite strange since living Koopas don't have any hair!
In Mario & Luigi: Superstar Saga, Dry Bones went back to their more primitive roots, looking kind of like the bony ones from SMB 3. Paper Mario: The Thousand Year Door brought back the same look from the first PM.