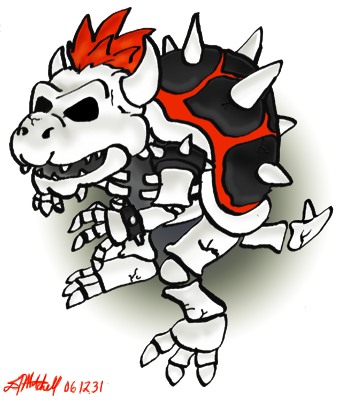 WEAKNESSES: If dropped from an extreme height, he'll break apart.

BACKGROUND: Everybody knew that it was only a matter of time before Bowser would over-play his hand. After Mario dropped Bowser into the lava in the World 1 Castle, it appeared to be sayonara for his reptilian adversasary. After writhing in the lava, Bowser lost his skin, and then sank to the bottom of the pit. Little did Mario know, however, that Bowser, full of emotions that he had never exposed to Peach properly, had unfulfilled desires. And so, Bowser came back as something that was merely a shadow of his former glory. Dry Bowser was invinicible. Fireballs could do him no harm, and he now could throw his own bones.
However, not even Dry Bowser could defeat Mario. After swiftly dodging the fireballs and bones, Mario hit a switch that plunged the newly-reborn Bowser into the depths of his own castle- shattering the bones of his rival, but also breaking the remnants of an ancient Koopa magic that had kept Bowser alive, even through death. Bowser was nothing more then a pile of bones and dust.
Bowser Jr., stumbled upon a potion that was easy enough to make, and would give life to his father's dusty bones. Mario caught up to Bowser Jr. just as he was about to complete the spell. Before Mario could even blink, Dry bowser had been reborn as Bowser. He was now back to his old, fire-breathing old self.