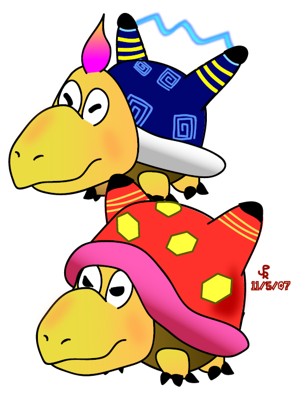 STRENGTHS: Its electricaly charged shell protects it from most attacks.

BACKGROUND: Electro-Koopas are small, turtle-like creatures that inhabit Isle Delfino's Pina Park. They wear electronic shells with spikey turrets mounted on top. Each of these turrets have a sparking strand of electricity running from tip to tip, like a Jacob's Ladder, shocking anyone who tries to jump on them.
It seems that these electric turtles were originaly just another attraction in Isle Delfino's amusement park, considering how nobody seemed particularly surprised or concerned about them (only two people in the whole park actually mention them at all). Either the new "attraction" got a little out of hand, or when Bowser invaded the island he managed to bring them under his control (they are, after all, Koopas). Either way, it didn't help tourism.
There are two main varieties of Electro-Koopas: Male and female. The males wear blue shells with two electric turrets on top, and the females wear red shells with three turrets. The females are also very capable climbers. Once there was also a rare green shelled Electro-Koopa which slept a lot and caused major electrical disturbances.