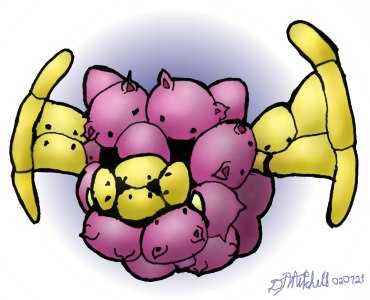 BACKGROUND: Enigma is actually a cluster of smaller, pink bat-like creatures, such as the one pictured above. They share a consciousness and work together to form a larger creature, which looks similar, but is lumpier because of the fact that it is made of little monsters.
Because Enigmas are made up of many small creatures, they can reform their bodies, and do so when they need to. This ability is especially noticable when an Enigma feels threatened.
Enigmas are quite intelligent, and could be dangerous, except that the are usually pretty tame. They became more aggressive than usual during the invasion of the Smithy Gang, possibly because of Punchinello's attack on their main habitat, the Moleville mines.