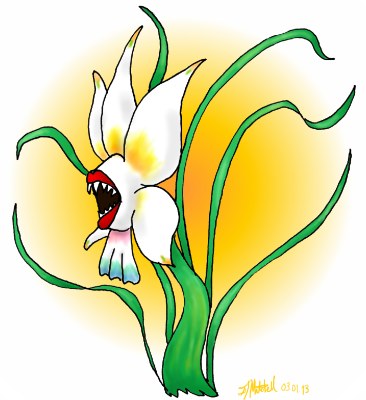 BACKGROUND: Fink Flowers are large carnivorous plants that live in the arid regions around Land's End. These plants feature a beautiful but deadly flower and they can be dangerous to travelers that don't use caution.
Fink Flowers will often disguise their true nature until unwitting prey gets too near, then they launch a surprise attack. Fink Flowers have a close relationship to Stingers, a species of insect living in the same region. Stingers pollinate these flowers allowing them to grow all around the area, for this reason Fink Flowers do not eat Stingers and may be seen cooperating with them in a battle.