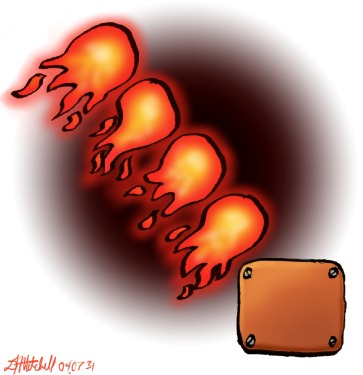 BACKGROUND: The Firebars are what you get when you combine an average block with a bit of Koopa Black Magic. Bowser himself oversaw the making of these fine mechanisms and decided that, since they were so good for their time, they could guard his castles!
Bowser tried all kind of other weapons over the years, but Firebars were brought back for some of the castles in Paper Mario. This game also introduced Dual Firebars that had flames rotating on opposite sides instead of just one bar of flames. Bowser also placed some in his castle level in Mario Kart: Double Dash.

EVOLUTION: Despite the fact they are mechanical, they have appeared slightly different over time. In Super Mario Bros and The Lost Levels, Firebars appeared as in the above picture, 6 fireballs, and moved in a clockwise rotation around a block.
Firebars returned without the block base in Yohsi's Island. They also rotate horizontally instead of vertically so Mario has to jump over them instead of running over or under them. The same Firebar design returned in Paper Mario: both games feature some Dual Firebars that have two ends.