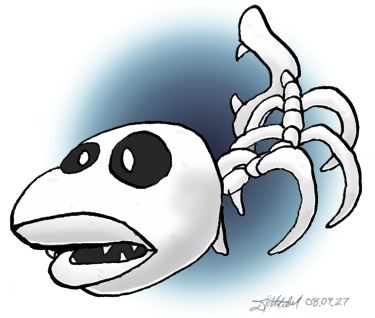 BACKGROUND: Fishbones are undead fish that are possibly relatives of Cheep Cheeps or Blurps. They were recruited into Bowser's army and were used to guard the areas around sunken ships. Since Bowser's defeat in Dinosaur Land, they haven't been seen, suggesting they're native to that area.

EVOLUTION: In Super Mario World they are just swimming fish skeletons. They returned in Super Mario Land 2 with much the same appearance.
In Super Mario Galaxy in addition to being 3D, they are now silver with sharp teeth and glowing red eyes.