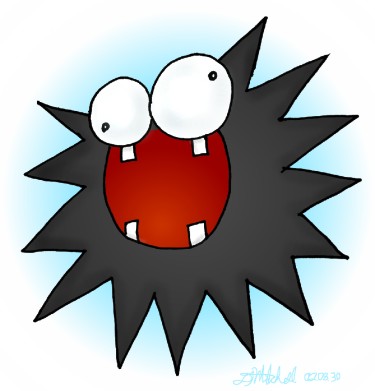 STRENGTHS: They are hard to catch, and in Super Mario World they are actually invincible.

BACKGROUND: Fuzzies are strange little creatures that bounce around on the ground and like to climb into trees and other high places. They can secrete a spider web-like substance, and they even look a little like spiders, but they are not. The little guys have big fuzzy black heads with large mouths.
Fuzzies have been known to work for the Koopa Troop, but they are are usually wild. In fact, they are very unpredictable in general, and like to cause mayhem. Some Fuzzies are nearly invincible, but they usually aren't too dangerous. They are very fast and can cause a lot of trouble with their mischievous nature, but they don't cause serious harm unless provoked.

EVOLUTION: Fuzzies first appeared around the time of Super Mario World. They haven't changed a lot in appearance, their fur seems to be a bit thicker, but they are still basically little black fuzzy things with eyes and a huge mouth in Paper Mario.
The creatures have changed somewhat in their behaviour and strength though. Originally they were impossible to defeat, and they usually lived on wires high in the sky. In Paper Mario they tend to keep to the ground, and they bounce around a lot.
There are also Fuzzies in SMW2: Yoshi's Island, but the Fuzzies in that game seem to be an unrelated species. Yoshi gets "dizzy" when he touches them.