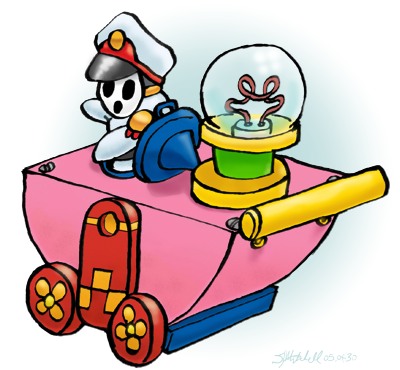 STRENGTHS: Has a big tank.

WEAKNESSES: His light bulb can be broken.

BACKGROUND: General Guy is... well, a general. For years he trained his men at an unknown location, the Shy Guy Toy Box. At about the same time Bowser gave General Guy a Star Spirit, supplies were running out. Even though General Guy knew he took a big risk, he ordered some Shy Guys to steal some food. The Shy Guys were quite pleased with how they got away with it. They started stealing more stuff and disobeying General Guy. They went outside the box whenever they wanted.
When Mario was spotted Inside of the Toy Box, General Guy tried to gather all of his soldiers, but things were to disorganized. General Guy was defeated by Mario and was never seen again.