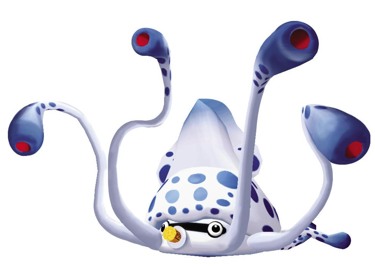 STRENGTHS: The four tentacles should be killed before dealing with his head.

BACKGROUND: After the Shine Sprites left the Shine Gate, Gooper Blooper, a giant Blooper, appeared in Ricco harbor. He put ink in the water, making it dirty. After Mario beat him, he appeared again, this time on a lone platform, thinking it would give him an advantage, but Mario beat him...again. Then he decided to go to Noki Bay and sit on top of the opening to the Shine Room in the Tricky Ruins. But, guess who showed up and sent him flying - Mario!
After that, Gooper Blooper decided to quit fighting and pick up Tennis. Bowser managed to convince him to return to fight Princess Peach a few years later, it seems you can't keep a bad squid down.