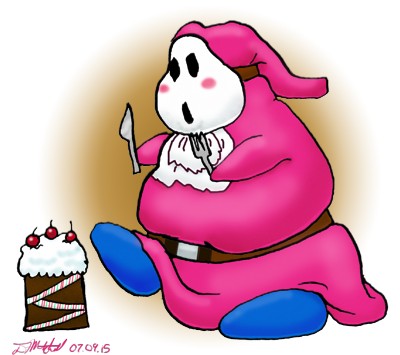 BACKGROUND: Gourmet Guy was a Shy Guy just like any other. He first discovered his true love at a friend's wedding when he was a young man: Cake. When he took a bite of wedding cake, his world turned upside-down, and his taste buds went into a frenzy. From that moment on, he ate cake whenever he could.
But a Shy Guy cannot live on cake alone. Needing a job, Gourmet Guy joined General Guy's army, and was sent to guard a rail switch in Shy Guy's Toy Box.
Unfortunately, however, Gourmet Guy gave in to Mario's bribe of a slice of cake, and allowed him to pass his post undisturbed. Angered by his lack of duty, General Guy discharged Gourmet Guy from his army, and Gourmet Guy went to Peach's Castle while Bowser was in control of it. He was promptly coerced into giving information about Bowser's plan to Princess Peach when she gave him a delicious slice of strawberry shortcake. Gourmet Guy now resides in Toad Town, right next to Tayce T.'s kitchen.