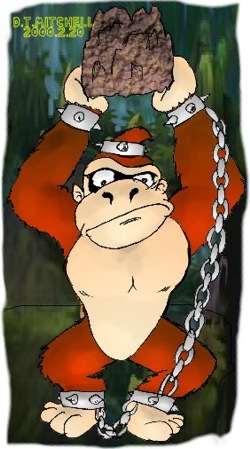 BACKGROUND: These powerful gorillas were taken prisoner by Smithy and forced into his service. They bear a startling resemblance to Donkey Kong, the ape that has done battle with Mario a few times.
It is believed that Guerrillas were probably wild in nature, but this is uncertain, because they are not native to the Mushroom World Smithy brought the creatures with him when he invaded, and used them as slaves and ground troops during his invasion. According to Mario and Luigi, similar creatures existed in the world they came from.
Since Smithy was defeated, not many Guerrillas have been spotted. It remains to be seen whether or not they can survive in the Mushroom World's foreign environment.