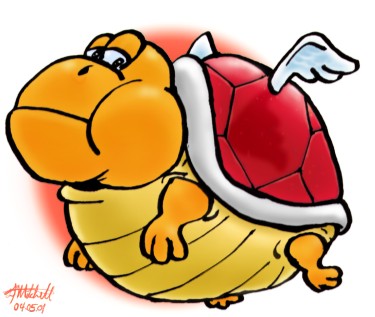 BACKGROUND: Heavy Troopas are gigantic, overweight, humongous Red Koopa Paratroopas. Their wings are too small to fly, but they do allow them to jump. Watch out if you happen to be nearby when they do that, because if they land on you, you will feel it!
Luckily, Heavy Troopas are slow and usually pretty calm and peaceful. They don't have to be agressive because their huge size makes them hard for predators to attack, and they prefer eating to fighting.
Since they're so slow and good-natured Bowser doesn't usually try to recruit Heavy Troopas for his Koopa Troops. Valentina, on the other hand, is fond of anything with wings and she used the giant turtles to reinforce her other troops when she took over Nimbus Land. Led by Valentina's soldiers, they were dangerous but still too slow to pose a big threat to Mario and his companions.