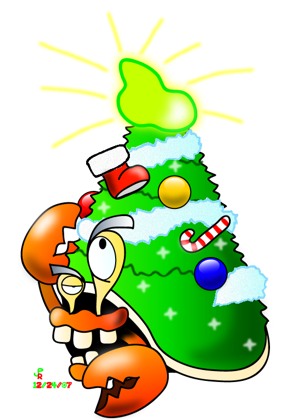 STRENGTHS: His shell lowers all damage to 1.

WEAKNESSES: The weather outside's not frightful, so a fire won't be delightful. He also seems to have slight arthritis in his claws.

BACKGROUND: Hermie III is (supposedly) the third in a line of Hermies. Three things are known about him: He loves Christmas, celebrating it year round; he seems very old, senile, and has a terrible lisp; and he is on friendly terms with 3 swimsuit clad women of unknown species that live by Gwarhar Lagoon.
When a piece of the Beanstar landed by him, he figured it would be the perfect... shell topper. That's right: he decorated his shell like a Christmas tree. Well, Mario and Luigi showed up to reclaim the Beanstar. As soon as they arrived Hermie saw Mario and (humerously) connected his red clothes and facial hair to none other than Santa Claus. But Hermie's lady friends immediately went over to Mario and it looked like they were asking him questions and kissing him all over his face like groupies. Hermie was getting annoyed. Soon after, they recognized Luigi and started questioning and kissing, but more intensely due to the fact that he's rarely out in the field. Soon, Hermie got tired of the girls flirting and acting like fan-girls, and attacked the Mario Bros.
After a beating Hermie realized that all the plumbers wanted was the piece of the Beanstar and not his friends' lipstick all over their faces. Hermie complied. Eventually the Bros. brought Hermie an Elvis wannabe star named Spangle.