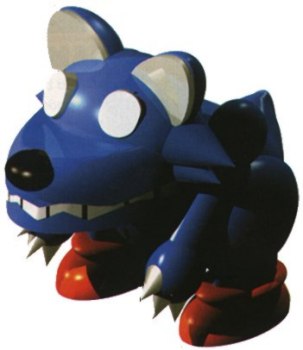 BACKGROUND: K-9s are unusual little blue robotic dogs. They appear to be wild, but that is impossible because they are mechanical. So the question is: Who constructed them?
The most popular theory is that Smithy created them. It is well known that he had the technical capabilities to build such a machine, and most of his army was made up of mechanical monsters. It is also important to consider that the robotic dogs first appeared during his invasion and mostly disappeared afterwards.
Some argue that others, such as Bowser and Booster have enough technology to build something like a K-9, and may have been responsible. They also point out that Smithy sent an organized battle unit straight to the Mushroom Kingdom Castle, so why would he need the basically wild K-9s? Perhaps he sent them to round up and organize wild monsters into fighting units.
Most Mushroom Kingdom experts have come to agree that Smithy is the most likely candidate for building the K-9s, so they are considered part of the Smithy gang. K-9s are not very dangerous on their own, but they usually team up with stronger monsters.