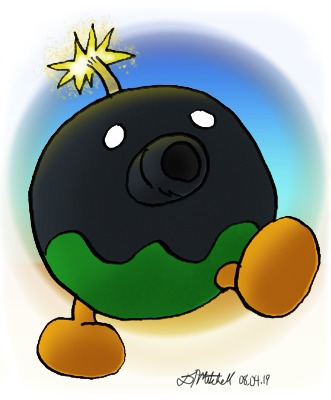 STRENGTHS: Fast - especially when fuse is lit; can't be picked up like a Bob-omb.

WEAKNESSES: Their fireworks can't hurt you.

BACKGROUND: Like Bob-ombs, Kab-ombs are explosive little critters that look like walking bombs. But Kab-ombs don't seem as mechanical as Bob-ombs do.
It is believed that they hatch from eggs. Kab-ombs aren't very bright, though. They build their nests near volcanoes. When they erupt, the volcanic ash and lava will light their fuses and they blow up! Unless they are trying to set off themselves deliberately, in which case they couldn't have picked a better spot to hang around. The only problem with that is when one of them ignites, they start running around frantically as if they had no idea it would happen!

EVOLUTION: Kab-ombs where actually first seen in Mario & Luigi: Superstar Saga. Here they were small, pink, and had little round noses. Kab-ombs weren't actually enemies you fought; they were more of an obstacle seen during some boss battles (for example, during the fight with Popple and Birdo, when Birdo turns Popple into an egg and hides him among three others, breaking open the wrong egg will release a Kab-omb, which charges at you and explodes).
They changed a lot the next time they showed up, this time as a normal enemy, in New Super Mario Bros. They were the same size as a Bob-omb, and they were navy blue with a green bottom. The "nose" turned out to be a sort of snout resembling a detonator cap. The actual detonator cap is in the same place as a Bob-omb's. Maybe the snout is there to confuse enemies so they can't tell which direction it's facing. They also began to have firework-like explosions, which wouldn't even hurt you; the Kab-ombs would just rocket off harmlessly into the sky and burst into sparks!