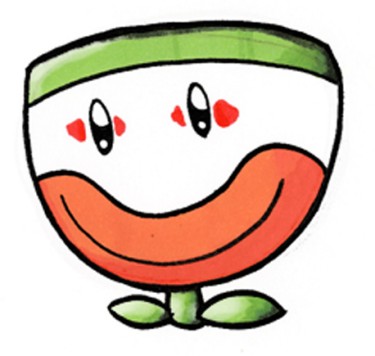 STRENGTHS: Can't be defeated by ANY normal attack.

WEAKNESSES: Not very agile in the air.

EVOLUTION: This may seem strange, but the Koopa Clown Car has made some changes over the years.
In Super Mario World, the Koopa Clown Car was the best out of the bunch. Its eyes and propeller are the right size, although it does seem a bit stretched.
The Koopa Clown Car had short appearances in Super Mario RPG and Paper Mario, but we don't have screenshots or information about what it looked like in those games right now.
In Mario and Luigi: Superstar Saga the Koopa Clown Car was stretched out to the sides a bit, and it was not very tall; some people think that this is Bowletta's special version of the car, but since it doesn't appear to have any extra abilities, this has been dismissed as a load of rubbish. Note however, that it seems able to change expression at will, when Bowletta laughs, it goes to an angry grin type mood, and it is also able to grab Princess Peach's dress, which supports the theory that it's alive.
Chronologically, the Koopa Klown Car first appeared in the Mushroom Kingdom of the past in Mario & Luigi: Partners in Time, so it appears to have been in the family for a long time!
The car also had cameo appearances in Super Smash Bros Melee and Mario Party 5. Super Smash Bros. Melee was its first appearance in 3D! It is very similar to the one from Super Mario World, but this time it is slightly wider/fatter. In Mario Party 5, the Koopa Clown Car has a longer propeller then previous versions. It also appeared in Mario Party 6 and 7.