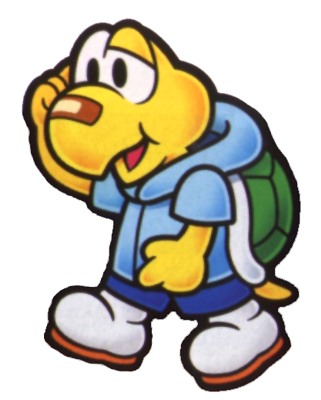 STRENGTHS: Good defence, can hit distant switches, has a girlfriend.

WEAKNESSES: Can't tell the difference between Mario and Doopliss, his crush on Ms. Mowz.

BACKGROUND: Koops hails from the sleepy town of Petalburg. Tourist attractions include local ruins, a castle, and a man eating dragon. Ever since that dragon, Hooktail, ate koops' dad, Koopley, she's been the target of Koops' rage and vengeful desires. Too bad he's a coward with no fighing skills. Once Mario came along, Koops travelled with him to become stronger for his girlfriend, Koopie Koo. In the castle he found his inner strength, his dad, still alive, and gained a hopeless crush on another groupie of Mario's, international badge theif, Ms. Mowz. He still stuck around Mario, even after he defeted Hooktail.