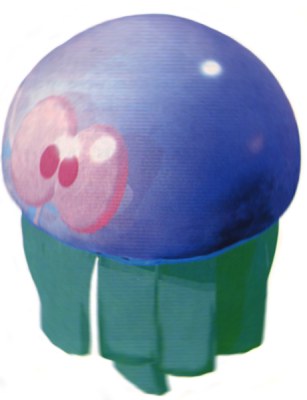 BACKGROUND: Leukos are underwater monsters with powerful electrical and ice attacks. They are generally harmless unless provoked, and they can prove to be a major nuissance for magic-users because they have a defense mechanism which causes them to counter magic attacks with powerful attacks of their own.
The creatures are large aqua-coloured jellyfish with short, broad tentacles. They have two large, pink eyes. Leukos are wild and have no particular affiliations, except perhaps to the famous under water pirate, Jonathan Jones. Since they are not highly intelligent, they could probably be trained to work for anyone who wanted them to fight.