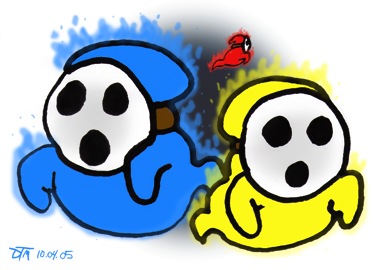 WEAKNESSES: If DK presses a button corresponding to an Electro Guy's color, it will deactivate.

BACKGROUND: Shy Guys have created numerous inventions over the years, but one of their best was the electro suit, which allowed a Mini Shy Guy to be transformed into a Mecha Boo Guy.
However, the only way to give Mini Shy Guys this power was to be radio controlled by red, yellow, and blue buttons - when Donkey Kong arrived, the dumb monkey just kept playing with the buttons, turning them on and off. After this calamity, Shy Guys never used the electro suit again.